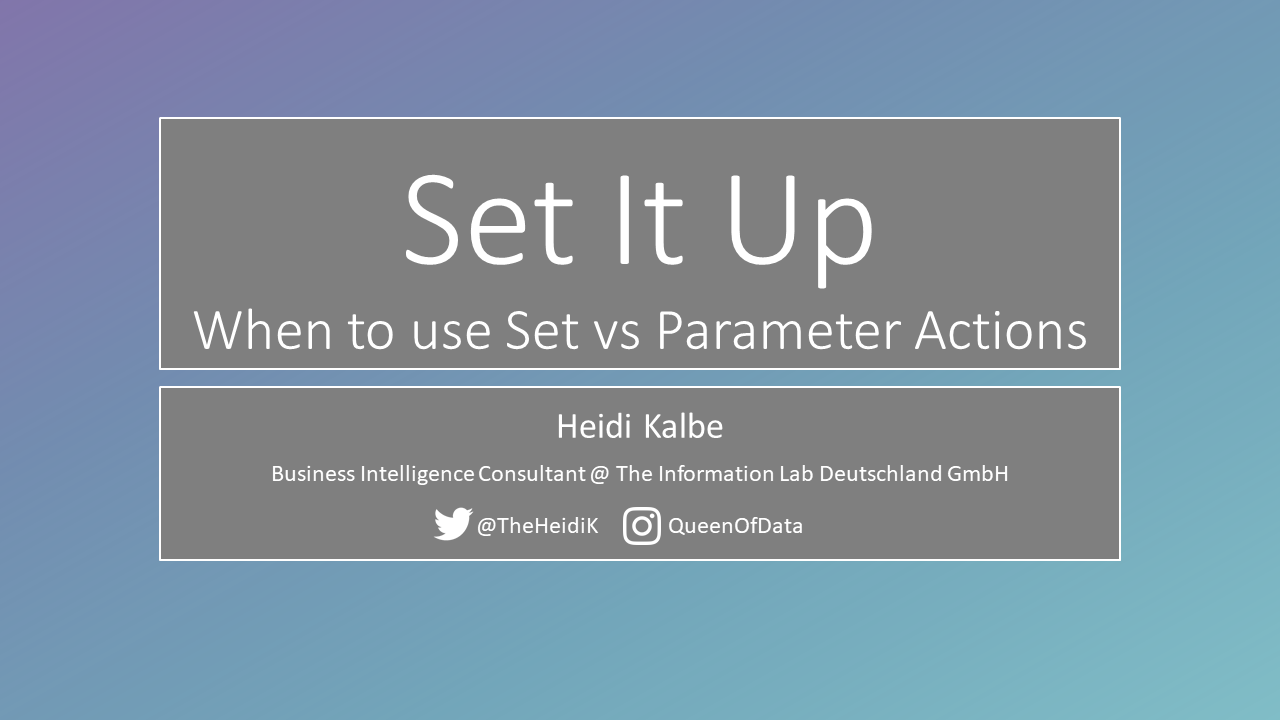 Does is sometimes happen to you that you see a tweet or a LinkedIn post where one of the Tableau jedis of our community shows how to do something you never thought was possible in Tableau, and it completely blows your mind? Because it happens to me. All. The. Time. In fact, it has happened to me more and more frequently in the last year.

Tableau keeps rapidly publishing new features. Some of the biggest recent game changes amongst them were Set Actions and Parameter Actions. We’ve seen people accomplish amazing things with those two features. There’s plenty of resources on how to do those things, but I want to get down to the basics:

I will split the contents of my recent session at TFF NorthAm 2019 into four blog posts:

Let’s start at the beginning: what kind of interactivity in the form of actions did we use before Tableau gifted us with Set and Parameter Actions?

Well, of course there were Filter Actions, and they were – and are! – great. They helped us limit which data was being shown. But sometimes users have difficulty understanding what is currently being filtered, and interaction between quick filters and actions filters can be messy, even if you synchronize them. Filtering across multiple dashboards using Filter Actions could bring out bugs at times. Users were unable to use Filter Actions to exclude the selected values, rather than include them. And depending on your use case, you would need multiple actions per dashboard.

What we also had – and have – are Highlight Actions. Those would help us visually bring to the forefront certain selected values. But those highlights would be gone the moment a user deselected the previously selected marks. Highlighting across dashboards could be messy, and if you were not careful and were trying to highlight certain fields in a sheet that didn’t contain those fields, everything would be greyed out.

Depending on your use case, you would have to create multiple actions in order to get to your desired result. And if you wanted to recalculate reference lines (which you don’t technically need a Highlight Action for, but I’ll mention it here anyway), said recalculated reference line would also be gone again upon deselection. Now, let’s take a look at an example. We have here the CO2 emissions of 250 countries from 1960 to 2014. I want to highlight a few selected countries in order to see how their development over the past fifty years compares to their 2014 emissions, and vice versa. So I implemented a Highlight Action.

I can now select a few bars and the lines will be highlighted accordingly, or the other way around. The reference line gets recalculated, so that I can see the average value for all selected marks.

However, the moment I click anywhere, my previous selection will be gone, as will my highlights and the recalculated reference line.

Since I have another dashboard using the same data source, I want that to be highlighted as well. So I add in another Highlight Action.

And now let’s see how this works out: I’ll select some bars and check out the other dashboard. Yes, the bubbles and pie slices are highlighted, just as I wanted. If I want to reset the highlighting in here, however, that doesn’t work at the moment, since nothing is actually selected.

I would have to either go back to the first dashboard and deselect there. Or I could create another Highlight Action in this dashboard, select some values and then deselect again, thus resetting the highlighting. That’s not exactly super user friendly.

And that’s where Sets come into play – which you will learn more about in my next blog post: Set Action FUNdamentals.